Louise & Abi on their Wedding Day 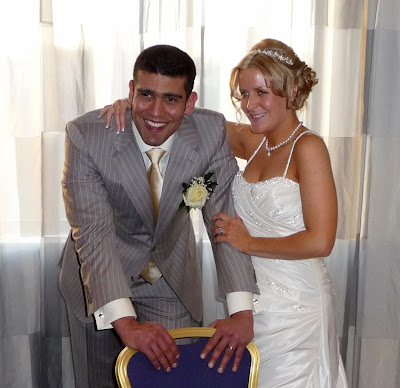 Congratulations to my good friends Abi and Louise who were married in Dublin last week. I hope they have a long and happy life together!
Posted by Blogaire at 01:18 2 comments: 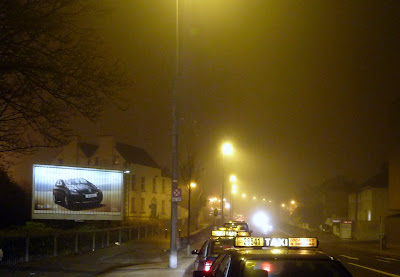 I have a confession to make ...shhh...I Collect Toy Cars!
"OK, nobody's perfect!" (I patented this saying same as Paris Hilton patented "It's hot!")
I just saw those models in the latest issue of DIECAST COLLECTOR and as it's Friday again they are just ideal for PFF. For those who do not know PFF stands for Postcard Friendship Friday, it's a fun event hosted every Friday by the one and only Marie - The French Factrice. It's easy to join the fun - as easy as licking a stamp, so why not scoot over to her place where you will meet postal bloggers from around the globe.
Posted by Blogaire at 06:11 5 comments: 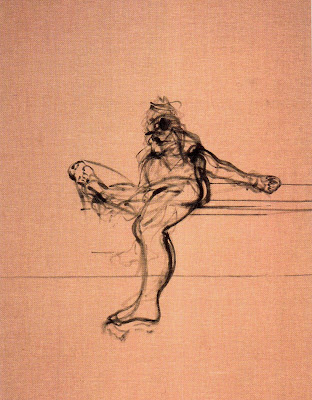 Untitled (Seated Figure) Here is a postcard of another Francis Bacon painting (see yesterday's blog), this time from c. 1979
Posted by Blogaire at 06:09 1 comment: 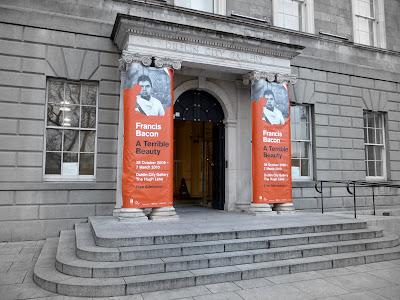 Yesterday I visited the Francis Bacon exhibition A Terrible Beauty in Parnell Square. It's an incredible experience that not only shows his work but also the entire contents of his Studio at 7 Reece Mews, South Kensington, which was donated to the Hugh Lane by the artists heir John Edwards has been reconstructed in the gallery. 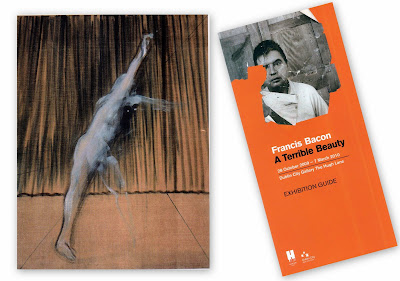 Untitled (Figure with Raised Arm), c. 1949 by Francis Bacon
Francis Bacon: A Terrible Beauty celebrates the centenary of Francis Bacon's birth at 63 Lower Baggot Street, Dublin on 28 October 1909. His father, a former captain in the British army, moved to County Kildare to breed and train racehorses. Following a disagreement with his father, Francis left home at the age of 16 and after a stay in London he travelled to Berlin, but it was in Paris that he found a new sense of purpose. An exhibition of drawings by Picasso at the Galerie Paul Rosenberg inspired Bacon to become an artist. On his return to London he achieved some success as a furniture designer, but soon rejected this path and turned to painting. He first gained recognition as a painter with Crucifixion in 1933, but it was not until the mid- 1940's that his artistic career took off. The critical success of his Three Studies for Figures at the base of a Crucifixion, c. 1944, established Bacon as a new force in post-war art. Apart from periods spent in Monte Carlo, Tangier and Paris he spent the rest of his life in London. His high spirits, ready wit and exceptional generosity attracted people from a wide variety of backgrounds including artists, writers and Soho eccentrics. Many of these individuals feature in his portraits.
The artist himself was nothing if not eccentric and the Hugh Lane exhibition include some of the work that he destroyed after exhibiting or if he was not happy with it, by cutting pieces out of the canvas with a knife.
Francis Bacon died in Madrid in April, 1992.
Posted by Blogaire at 14:54 2 comments: 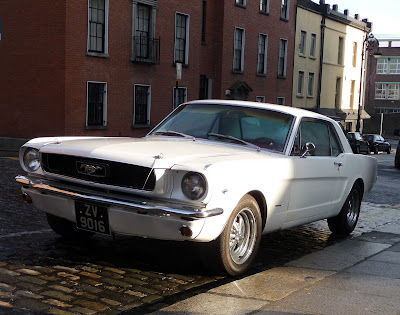 I came across this American icon - a Ford Mustang soaking up a little bit of weak January sunshine in Henrietta Street. I am not an expert on American automobiles but I think this Mustang is a 1960's model. "Mustang Sally , now baby..." Ah yes, the brilliant Wilson Pickett R&B song, apparently a tribute to the Mustang and which featured in one of my all-time favourite movies - The Commitments.
Posted by Blogaire at 20:50 3 comments: 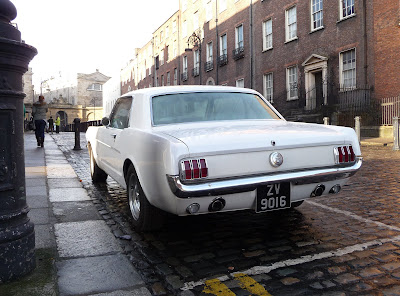 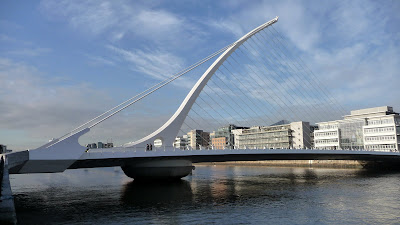 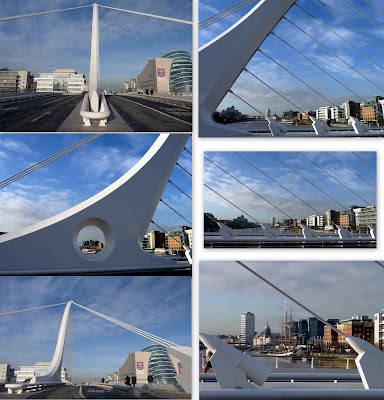 In four of the photos in this montage you can see the subject of yesterdays blog, The Jeanie Johnston
Posted by Blogaire at 19:38 1 comment: 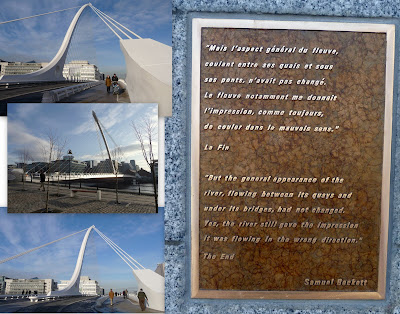 Posted by Blogaire at 19:37 No comments: 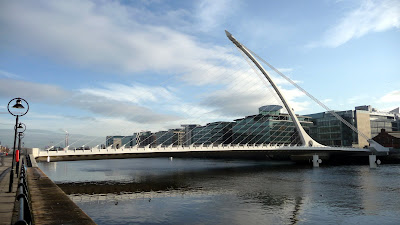 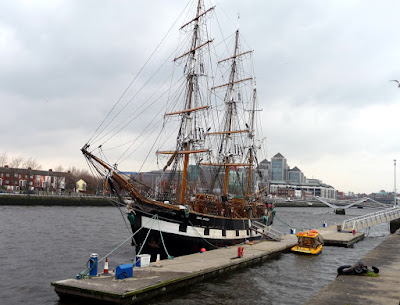 The Jeanie Johnston is a replica sailing ship which was built to commemorate the 150th anniversary of the GreatFamine which devastated Ireland in the 1840's.
Posted by Blogaire at 18:19 2 comments: 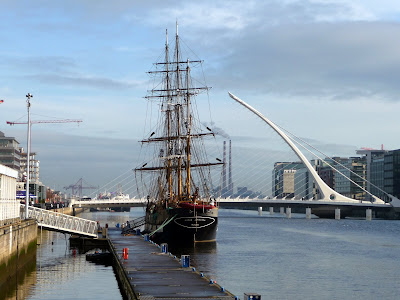 This stunning ship was built in Blennerville, County Kerry and is a replica of a 19th century sailing ship. The Jeanie Johnston is moored in Dublin's docklands and operates as a Sail Training vessel, a Famine History museum and a venue for corporate entertainment.
In this photo you can see the new Samuel Beckett bridge and the Poolbeg generation station chimneys in the background.
Posted by Blogaire at 18:17 1 comment: 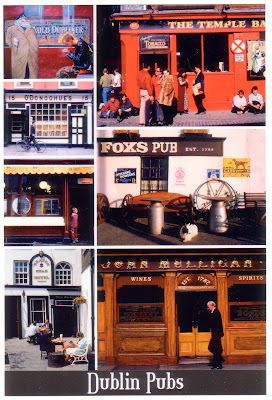 Postcard Friendship Friday is the brainwave of the lovely Marie, otherwise known as the French Factrice. It's easy to join the fun - just post something - anything, with a postal theme on your blog every Friday, link it to Marie's site and meet lots and lots of other postal minded bloggers from around the world. Easy isn't it?
For my PFF this Friday I have unearthed this postcard of some well known Dublin Pubs. Very appropriate really as I spent half this week in Molloy's of Talbot Street. All in the name of research of course!
Posted by Blogaire at 00:47 7 comments: 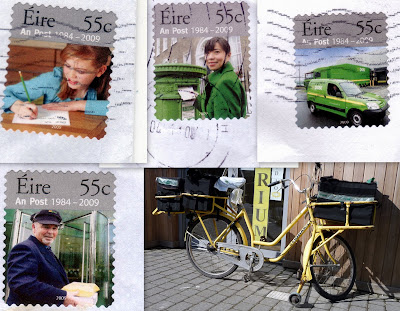 I featured Molloy's Pub in Talbot Street onTuesday's blog and my good blog friend Stephanie over at A Little Birdie Told Me So enquired about the sculpted heads above the windows outside. My initial enquiries were unsucessful so I went back to Molloy's today (for another Cappucino) and the helpful Barmaid was able to throw a little bit of light on who were the mystery figures. Apparently Molloy's was originally a tea merchants and not a pub at all. And the clue was in the figure that I actually missed on Tuesday and is that of a Chinese man (pictured in todays collage). The story goes that the Sculptor created his figures from some of the tea merchants who frequented the shop which is now Molloy's Pub. However we may never know their exact identity!
Posted by Blogaire at 15:00 2 comments:

A pint of plain is your only man 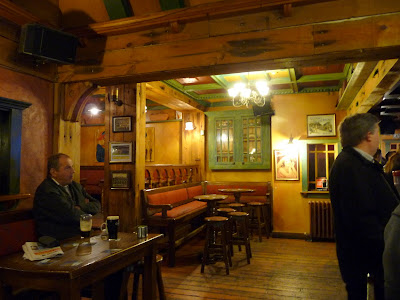 And I wouldn't change it for all the tea in China!

Guinness, also called porter or stout was sometimes referred to in Ireland as "plain porter". A pint of plain is your only man is a well known line from Flann O'Brien's poem "The Workman's Friend"
Posted by Blogaire at 14:55 2 comments: 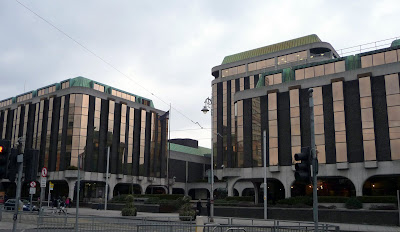 The Irish Life building on Lower Abbey Street (actually it stretches right through to Talbot Street) is an office block with a shopping mall on the ground level.
It was built in the 1970's by the pensions, life insurance and investment company Irish Life (founded in 1939 and now part of the Irish Life & Permanent group). In a discussion forum on Archiseek it gets mentioned as one of Dublin's ten ugliest buildings, but personally I don't think it's that bad. Certainly on a dull and overcast January day it's brown tinted glass façade adds just a hint of colour(color) to an otherwise grey(gray) cityscape.
Posted by Blogaire at 13:01 2 comments: 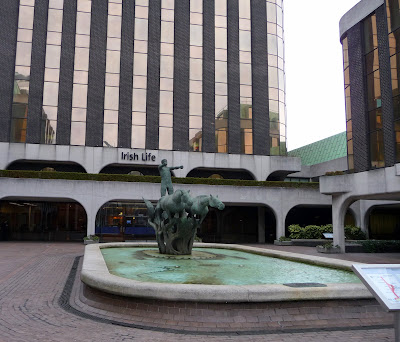 Whatever about the merits or otherwise of the Irish Life building the sculpture in front of the main entrance is certainly impressive. "Chariots of Life" is a piece by Oisín Kelly (who died in 1981). I also featured two other pieces by the same sculptor in earlier blogs - "Jim Larkin" in O'Connell Street (June 5, 2009) and "Two Working Men", in front of County Hall, Cork (August 30, 2008).
Incidentally, all Dublin sculptures and statues have local colloquial names - "Chariots of Life" is known as "The Mad Milkman of Abbey Street".
Posted by Blogaire at 12:59 3 comments: 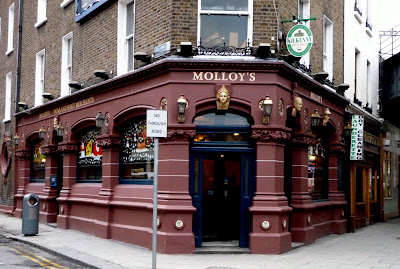 Dublin is famous for it's pubs and many of them are architectural gems dating back to Victorian times. There is a strong connection between Dublin pubs and many of our famous authors - perhaps because many of them like Brendan Behan and Patrick Kavanagh were fond of the "black stuff"(Guinness). In fact there are organized "pub crawls" that take in some of the more famous pubs, especially those visited by Leopold Bloom on his walk around Dublin in Ulysses. Some (like The Irish House on Wood Quay) were sadly destroyed during the destruction of parts of old Dublin in the 1960's and 70's to be replaced by ugly office blocks.
I have my own particular favourites and I will hopefully feature some of them over the next few months, but I will start with this lovely corner pub - Molloy's, a listed building on the corner of Talbot Street and Talbot Place. It is usually busy and attracts a mixture of locals and commuters because of it's proximity to Connolly train station and Busarus, Dublin's main bus station.
Posted by Blogaire at 15:34 8 comments: 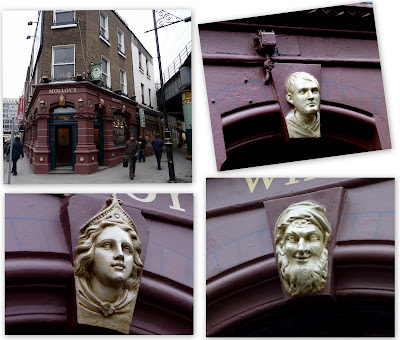 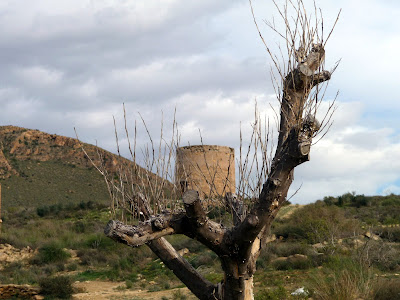 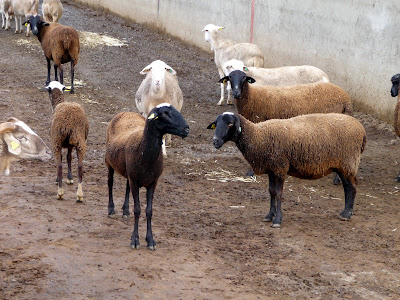 Sheep.
The main farm animals in the Murcia region are sheep, goats and pigs (I have never seen a cow in this area and fresh milk is not widely available. Most shops only sell long-life milk).
I photographed these sheep in a pen right beside a beside a casa in the village of Morata.
Posted by Blogaire at 20:47 1 comment: 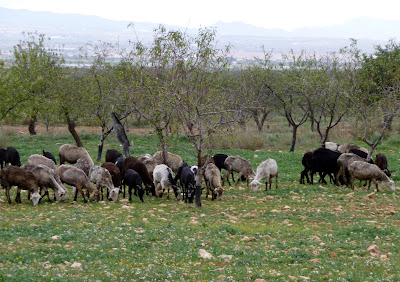 When you are driving in the country you often see herds of goats, like this one near La Pinilla. Notice the cheeky one climbing a tree to get at the luscious green leaves.
Posted by Blogaire at 20:40 No comments: 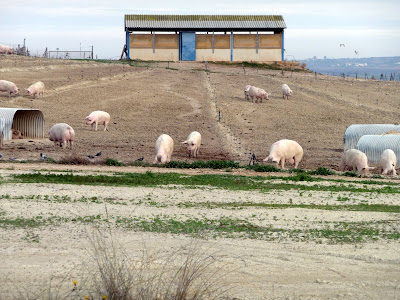 There are piggeries everywhere, but very near my house there is an organic one. The pigs are huge and are such beautiful animals. One lazy pig is having a nap in it´s casa.
Posted by Blogaire at 20:35 No comments: 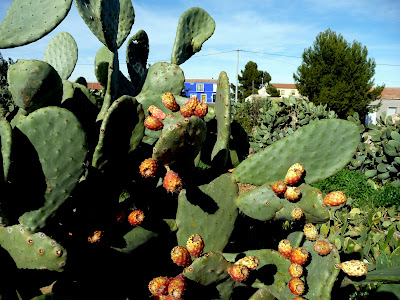 This wonderful cactus called Opuntia, also known as "prickly pear" is growing everywhere in Murcia at the moment. I once made the mistake of picking one and didn´t realize that it has tiny hairlike spines called glochids. I was picking them out of my fingers for days afterwards!
Posted by Blogaire at 18:24 No comments: 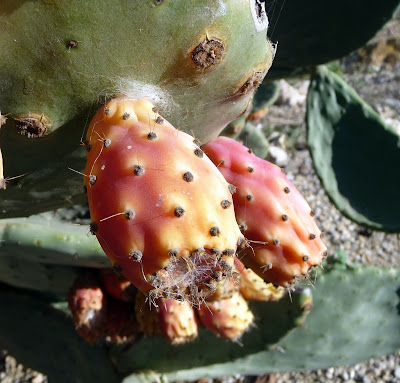 Posted by Blogaire at 18:23 No comments: 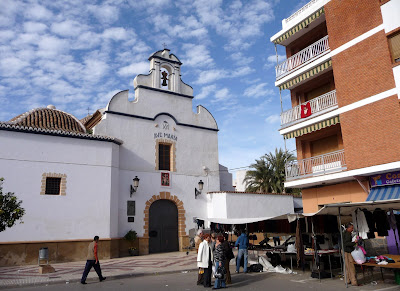 Every Saturday there is a market in Mazarron, in the town square in front of the little church
Posted by Blogaire at 16:28 3 comments: 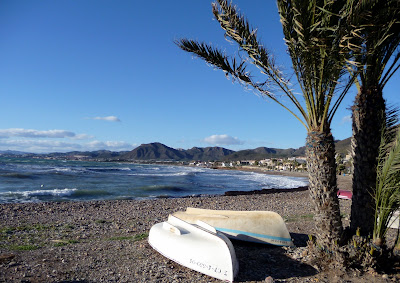 It´s the morning after the night before - and what better way to clear my head than a walk along the beach. There is a strong but warm breeze and the choppy Mediterranean sea is an amazing colour
Posted by Blogaire at 18:44 2 comments: 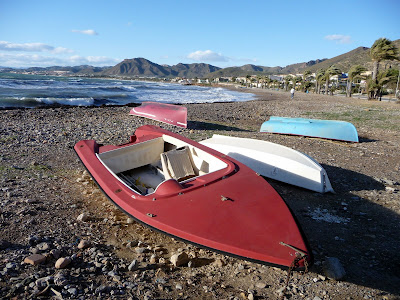 Posted by Blogaire at 18:41 No comments: 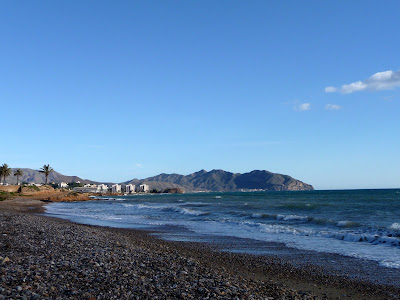 Posted by Blogaire at 18:37 No comments: